For several years, I looked at grape vines in seed catalogs. I read about raising them, and 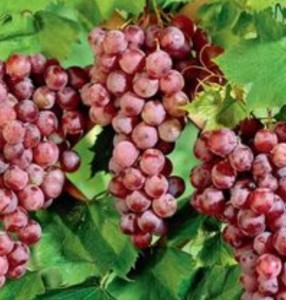 felt my skills might not be up to the task. Then, four years ago, my dad brought me a plastic bag with a bare vine in it. I have no idea how long it was in the bag before he brought it, but it took me a few days to get around to planting it. My hopes were not high.

But, that spring, it turned green and started growing like crazy. I had a gate from an old chain link fence and stuck it in the garden for the grape vine to climb. That first year, it covered the gate, and seemed happy and healthy.

The next spring came along, and the grape vine continued to thrive. After a little more reading, I did some careful pruning. I went out and checked every couple of weeks to see if there were any flowers or evidence of impending grapes.There never was. I read some more. My dad expressed the opinion that the galvanized fencing on the old gate was bad, and that’s why there were no grapes. Belle has since explained to me that grape vines have to be 2-3 years old before they begin producing.

Third year: I took the vine off the gate and planned to move it to a different location (it was a year of moving the entire garden). The key word in that last sentence is “planned.” The move never happened. As summer ended, I found three fat, sweet grapes on the vine! It was sprawling everywhere, tangled with grass and weeds, and in a completely messy area of old garden. There may have been more than three grapes, and I just couldn’t find them for all the mess.

This spring the story of my grape vine will continue. Maybe moving it (finally!) won’t mean three more grape-less years. But if that’s the case, so be it. Watching for grapes is almost as much fun as eating them!

I like a good app.  I like a good app even better when it’s free!
I love to knit, from socks to sweaters and everything in between. I use paper and pencil, highlighters and sometimes even buttons to keep track of written patterns and charts.
Then I found knitCompanion (free version) for iPhone.  It does all that in a simple and easy to use interface. The big hurdle is ‘how in the world do I import my pattern?‘

Once you open the app, there’s a big ‘projects’ and another big ‘pdf’ button. Neither of them will take you to a place where you’ll be able to add your own pattern.  Well, phoooeyyyyy!  This app stinks!   Not quite.  Here’s a step-by-step guide on how to import your pattern.

Voila – you’re done! Now you can enjoy all the tools from row counters to highlighting sections of text and marking locations (image 7).  The free version of knitCompanion even opens charts!