1. Hummingbirds are migratory and will start their journeys north very soon. In our region, we usually see the first hummers towards the middle of March. To make our location more attractive as a potential permanent home, it’s time to ramp up our feeding stations. No one likes wet and diluted food or to get soaked while dining, neither do the Hummers.

2. There are 15 types of hummingbirds in North America. Their favorite food is nectar, be it from the flowers in your garden or from a special feeder. Cleanliness is very important, select a feeder size that is either emptied every 3 to 4 days or empty and replace the sugar solution yourself to keep the nectar fresh.

3. Most urban gardens are not naturally rich in nesting material supplies. No longer do chickens run wild and leave behind assortments of feathers, nor are there fluffs of cotton or animal hair stuck to bushes and trees. Encourage the travelers to stay in your garden by providing some natural replacements for hard to find nesting materials.
Your efforts can be as simple as tucking your pets brushings into the bushes here and there.

Nectar Recipe
Please skip the food coloring! Some research suggests this addition is not a healthy choice for birds. Choose feeders with prominent colors or hang out some of last years Christmas bows near your nectar feeders instead. 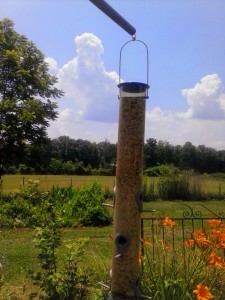 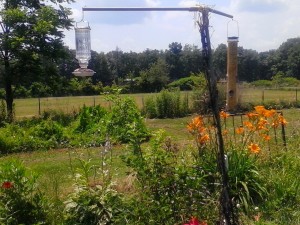