Guest column written by Dava Stewart
In Chattanooga, around the end of February and beginning of March, we usually start having random days of perfect weather. The definition of perfect, in this case, is a temperature  between 68 and 73 degrees Fahrenheit, a sky that is a shade of blue that 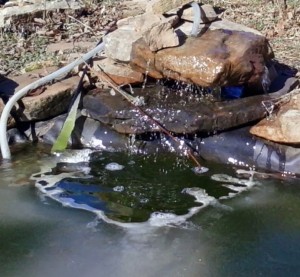 makes you want to sing, gentle breezes that tickle instead of cut…

On such days, I want to clean up my flower beds, rake all the leaves away, and start moving and planting. But it’s a bad idea. Our average last frost day is April 15, which means there are going to be several frosts and often even a hard freeze or two between the last week of February and when it’s really safe to plant any tender perennials or annuals.

During March, we also see daffodils budding (and sometimes even blooming!), azaleas and cherry trees bursting with color, and a whole host of perennials coming up. Right now, I have some daylilies, iris, and succulents coming up. None of them will bloom until at least late May, but they are already growing.

Some years, the frosts through March are mild enough that the early flowers are unaffected. Other years, they get absolutely zapped. It’s sad to see a whole patch of daffodils with blooms drooping to the ground, as if they’ve been beaten down, or an azalea with brown edges on all the blooms. But then again, that is what life does to all of us, right? We live through the hard times and bear the scars.

Anyway, there is no other time of year that affects my gardener’s heart quite the same way early spring does. I’m full of hope, trepidation, optimism, fear, and excitement.